After  mentioning the role a Museum plays on the narrative of a nation’s history; and the importance of cultural memory in the shaping of a nation’s identity, one understands why the repatriation of The Marbles is a matter of such great importance to the Greek people.

The advocates of the return do not only stand on the ownership argument, but also on the significance of the repatriation for the Greek people and for the integrity of the monument itself.

This aspect motivates many people to fortify the internationally spread movement of reunification. As it has been mentioned in previous posts, the movement was majorly reinforced by Melina Mercouri’s efforts. As a Minister of Culture in Greece in 1982, she attended the Unesco World Conference on Cultural Policies that was held in Mexico City. There, Melina Mercouri seized the opportunity to address the issue of the repatriation of the Parthenon Marbles to a global audience. On her speech in front of the Ministers of Culture who attended the Conference, she urged for the support of the global community to Greek people’s claim. As she stated on her speech:

“It is now some six months since I dared make the suggestion that these marbles ought to be returned to Greece. Since then a small storm has been raging. But what I find most interesting is the fact that, following and interview with the BBC, I had hundreds of encouraging letters from individuals and organisations in Britain. I detect in these letters the English people’s love of justice and beauty.(…) 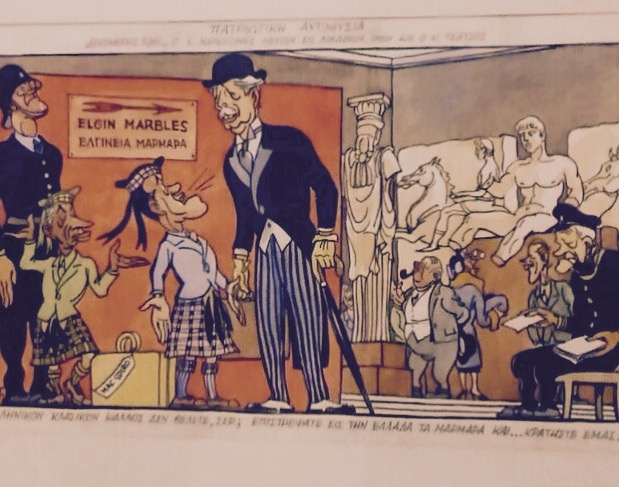 The two Greek politicians Markezinis and Tsatsos discuss with the British PM Harold Macmillan.Translation from Greek:

“Is it not Ancient Greek beauty that are you after,Sir?

Then return the Parthenon Marbles to Greece and… keep us in the Museum!”

Since then she got immersed in a battle for the repatriation of the Marbles, stressing the uniqueness of this claim, as it was the entity of a ruptured monument that was being discussed, and not the return of a solid monument as for example the Statue of the Triumph Nike. Her vision received wide public acceptance in Greece by academics; middle and working class people; politicians; artists; business circles; as well from other countries. Following the continuously expanding influence of the campaign, on October 1984 the Greek government made its first claim for the return of the Marbles, and soon received its rejection from the British side. In 1987, the Acropolis Temple was included in Unesco’s World’s Heritage Sites list, and every two years discussions are held on the issue of the repatriation of the Parthenon Marbles.

In 1983 the British Committee for the Reunification of the Parthenon Marbles (BCRPM) was formed supporting the Greek cause. The idea to set up a British Committee for the Restitution of the Parthenon Marbles was conceived by James Cubitt, a distinguished British architect. He believed that the Parthenon Marbles, as an essential part of an outstanding monument, should be put together in a museum as close to the Acropolis as possible. In the meantime Committees supporting the repatriation have sprouted around the world (Australia, Canada among others). Another campaign which is popular with social networks and the younger generations, is that using the quote “Bring them Back” usually introduced with a hashtag (#BringThemBack).

Since the strong mobilisation of the 1980’s on the issue of the reunification of the Parthenon Marbles, the matter has been in the political and cultural agenda of all consecutive Greek governments. Public campaigns have been laid, requesting the return of the Parthenon marbles to Athens, especially after the opening of the New Acropolis Museum (Zakakis N.; Bantimaroudis P.; and Zyglidopoulos S., 2015).